There are few more emotive vehicles than that of the VW campervan. For over 50 years, they’ve been providing a sense of adventure and freedom that was born in the 1950s and blossomed in the swinging sixties. For those looking to add a touch of nostalgia to their nuptials, there’s perhaps no better choice for your VW campervan wedding hire.

But why are campervans so popular for weddings? How did this vehicle, in particular, develop such a cult following? To gain a better understanding, it’s best to start with a quick history.

The VW Campervan: A Brief History

Contrary to popular belief, the VW campervan (also known as the VW bus, Kombi, Transporter, or Microbus) started life in 1950 almost over a decade before its heyday years. VW had secured traction in the automobile market with their Beetle. However, frustration grew as many customers desired a vehicle they could use for both pleasure and work purposes.

The cramped design of the Beetle made it impossible for those requiring vehicles for commercial purposes to even consider purchasing one. With that in mind, VW engineers got to work designing a panel van in order to meet the growing demand.

In 1950, the Volkswagen T1 Transporter (referred to as the ‘Splitscreen’ or ‘Splitty’) was created based upon a sketch by Dutch businessman, Ben Pon, following a visit to the Volkswagen factory. Pon was inspired by a parts-mover that he had seen during his visit, and rapidly sketched up an idea of how the VW Beetle could be developed into a commercial vehicle.

The first iteration of the vehicle came with a split windshield and included multiple variations throughout the years before being eventually replaced by the T2 Transporter in 1967. The continuous evolution included changes to the Volkswagen air-cooled engine, the wheels, rear barn doors, cargo capacity, and the engine bay size. Sliding doors were added as an option from 1964, and the available colours became more striking as time wore on.

Despite initial difficulty fulfilling orders due to the continued demand of the Beetle, the Transporter exploded in popularity once VW began to release a pioneering range of customisations. In the first ten years of production, the iterations included: the Panel Van, Microbus (7-seater and 9-seater versions), Samba, Kombi, Ambulance, Pick-Up and Double Cab.

It was the aforementioned Samba variety that catapulted the humble VW Transporter in cultural folklore. The campervan version hit the spot for the growing number of young hippies (a loose term to denote a member of the youthful counter-culture of the sixties). It allowed workers to store tools and travel all week, before turning into an adventure vehicle for weekends, holidays, and music festivals. Comfortably sleeping wherever you parked up gave drivers a sense of freedom that forever changed the automotive industry. 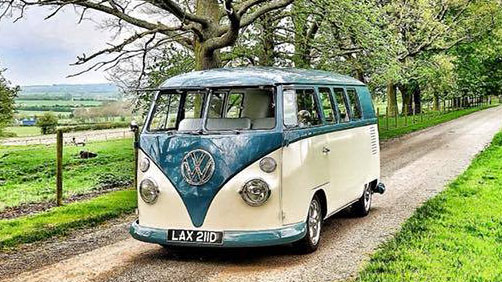 For many, the campervan symbolised the new-found social liberties fought for by the hippie movement, after the social restraints of the post-war era. Many would even wear jewellery made up of the VW badge; such was the synonymous nature of the relationship between young free-spirited individuals and their vehicles.

Over the intervening decades, there have been many facelifts and redesigns of the VW campervan, with the all-electric ID Buzz set to bring the design well and truly into the 21st century. But it’s the early models (T1 and T2) that evoke the memories of an era of liberation and freedom, and so these are one of the most popular choices for wedding hire.

Why Choose a VW Campervan for Your Wedding?

First and foremost, you may be one of those hippies mentioned above who fell in love with the VW campervan all those years ago. Hiring one (or several) for your wedding is likely to give you an overwhelming sense of nostalgia that will prove difficult to beat.

However, younger couples will still appreciate the internationally-recognised design that has become a global icon. There’s certainly no better way to arrive if you’re looking for retro wedding transport. You and your partner can sit in the back and remind yourself of what life was like when the Beatles and The Rolling Stones dominated the charts and split windscreens were still a thing!

Another reason you may want to consider a VW wedding campervan as your wedding vehicle is because they offer a rare combination of style and practicality. These vans were created as commercial vehicles after all! There’s usually room to seat at least six comfortably, which is perfect if your transporting groups such as the bridal party.

By the same token, by booking multiple VW wedding campers, you can transport a sizeable number of individuals from the ceremony to the reception venue. Perfect for giving your most important guests a wedding transportation experience they’ll never forget.

VW campervans have large cabin spaces for guests, and perhaps one of the biggest when it comes to legroom. You might want to fulfil your desire for nostalgia without having to deal with the cramped cabins that older vehicles traditionally offer.

On a similar note, a VW campervan allows you to decorate the vehicle to your tastes. With such a large canvas to work with, you can correspond with your vehicle owner to create a personalised space that will mean much more to you than a traditional “back seat of a car” wedding experience. 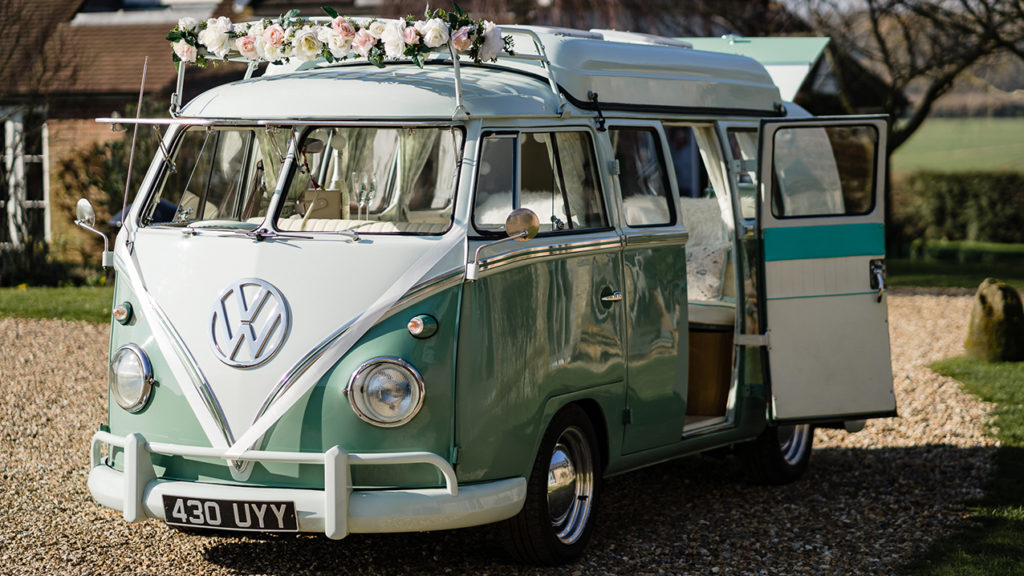 At Premier Carriage, we have perhaps the biggest selection of VW campervan wedding hire for you to choose from your wedding vehicle hire. Whether you prefer the earlier split-screen models of the sixties, or you yearn for the early-seventies T2 variant, we have a model and colour scheme to match your tastes.

Want to opt for nostalgia, but need more choice? With over 750 wedding cars and vehicles to choose from, you are sure to find something that matches your specific preferences whilst adding a touch of eccentricity to your special day. If you would like expert help concerning which vehicle to choose, then don’t hesitate to contact a member of our team who will help you find your perfect wedding hire choice!