1998 – The early days of internet. www.premiercarriage.co.uk domain name was purchased, and a website was created. 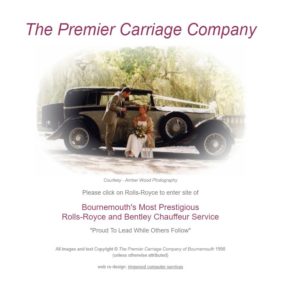 1999 – Following our success, we were approached by other wedding car owners wanting to work alongside Premier Carriage by offering their vehicles as alternatives to our own and later that year started the Marketing Services of different vehicle owners.

2001 – The business kept growing at a fast pace and Premier Carriage became a limited company. By that time we had vehicles in most southern counties covering, Devon, Somerset, Wiltshire, Dorset, Hampshire, Berkshire, Surrey, East and West Sussex.

2004 – Updated version of our website went live and a new logo was designed.

2008 – Newer and updated version of our website went live that year. We had just over 350+ vehicles at that time covering all Southern England from Cornwall to Gloucestershire to the Eastern county of Kent.

2011 – Premier Carriage marks a milestone with its 5,000th wedding booking in January of that year.

2014 – Word of Mouth reached the Welsh capital, Cardiff and our first wedding car hire booking was provided in Wales.

2016 – Michael, the founder of Premier Carriage retired as Director and was immediately succeeded by Didier.  A mobile-friendly website with new features was created. Following growing success Premier Carriage had to register for VAT in that same year. 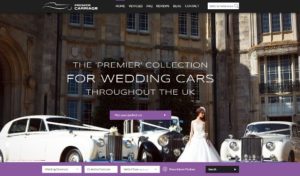 2018 – Premier Carriage won a selection of Wedding Awards and started its marketing of wedding transport in Scotland. Wedding awards included Gold Certificate of Excellence from BrideBook, 5-star WeddingWire recommended, Winner for Innovation and Excellence. List of our current wedding awards can be seen here and this year also marked a new milestone with our 15,000th wedding booking.

2019 – Our first Scottish wedding car hire booking was made in the spring of 2019.  In August 2019 Premier Carriage’s website grows to offer over 750 Vehicles for wedding hire. Voted LuxLife Best of the Wedding Industry.

2020 onwards – We are looking forward to see what the next 10 years brings us… Whatever it brings we aim to remain a leader in our field.